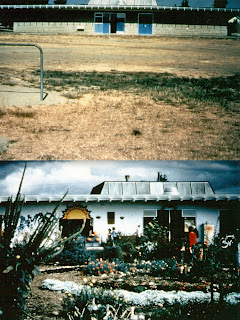 Life Lab project started at Green Acres School in Live Oak, California in 1978. Life Lab teachers transform a vacant lot into a thriving garden. They start developing curriculum based on the idea that children are motivated to learn scientific ideas by asking questions while in the garden.

An excerpt from the oral history of Robbie Jaffe, co-founder of Life Lab Science Program, recalling how Life Lab blossomed:
Government agencies could get funding to hire people who met certain qualifications, and they’d be paid through this training program to do certain projects. Well, Live Oak School District, which is in an unincorporated area, had a wonderful community schools director at the time by the name of Mark Seamark… Mark, with the support of the Live Oak School District board, created a project through Comprehensive Training and Employment Act (CETA) that got funded, called Project Blossom. It turned out that the Blossom staff was made up of, I think we had seven or eight people, seven women, and one token guy…It was a phenomenal group of creative energy, creative minds. We were funded, and we were based at Green Acres School in Live Oak… Some of us were working on school-based projects; some of us were working on community projects. It was pretty much a free-for-all. We could create whatever kind of projects we wanted, and we had that creative energy. We were probably all in our twenties, maybe some were in their early thirties, and it was a time to literally blossom, for us.

I got involved in a project creating solar greenhouses…We had some funding from PG& E [Pacific Gas and Electric] for the project, and I think the county government even kicked in some funding. We built the greenhouses on those folks’ homes. Then the principal at Green Acres School, George Buehring said to me, “Well, let’s do one here too,” and I, of course, said, “Oh sure!” We got the funding for that, and we built it adjacent to one of the classrooms, actually with Ruth Antolini who was my mentor teacher….
George said, “Great! You know how to garden, right? Let’s start a garden.” I said, “Sure!” He said, “Let’s do it right outside of my office.” So right next to his office we put in a fifteen feet by twenty foot garden. He invited me to a teacher’s meeting to invite the teachers to participate…George and I said, “Well, who wants to volunteer for it? Whoever wants to do it, I’ll be willing to work with your class.” Ruth, of course, was totally in there. Ruth has a farming background and was a totally experiential teacher. She loved it, and she helped shape what the program was and is. Four or five teachers participated. We had a great time! The combination of what I was getting from Rich Merrill (Cabrillo College Horticulture Instructor), and the whole idea of “This is science,” and understanding the interactions, and learning and living it, is what it was it was all about. The kids totally went that direction. We would follow the kids’ lead. They would develop questions, and we would say, “Let’s experiment. Let’s set it up. Let’s figure it out.” It was this phenomenal inquiry learning taking place at a time when science wasn’t taught at all in elementary schools, much less inquiry learning. It was very, very exciting. It was at that point very small-scale, but what would happen is the parents would start coming in and saying, “What’s going on? How come my kid is not involved? Why isn’t my kid’s class out here?” So there started to build up some momentum around it. In the meantime, (this was all still part of Project Blossom) Project Blossom had a grant writer on the staff, Erica [Lann] Clark. She’s now a storyteller in town. Erica and I worked to get some grant funding to expand this and to create a science and nutrition curriculum to go along with it. We got what was then called, Title IV C. It was part of the whole Elementary and Secondary Education Act, which is federal, which is now No Child Left Behind.

This was in ’79, and we got funding to develop a curriculum and establish a model program using a garden to teach science. That was the real start of Life Lab. George said to the staff, “Well, the first year of the program everyone’s required to participate, and then second year you could choose. But I want everyone to at least start off in it.” He gave us this whole [piece of land]— It was basically a dirt parking lot, an overflow parking lot for Little League, or whatever. All the topsoil had been totally removed. George gave it to us to transform…It was a phenomenal transition. It transformed everything, not only just that the gardens came and were absolutely beautiful, but the kids painted murals on the wall. The whole school took on a whole new energy.

Engineering in the Garden

Come be inspired to facilitate engineering experiences for students in the garden! Participants will engage in a 3rd-5th grade unit designed for NGSS in which students design and build trellises for peas in the school garden. We will make observations, build prototypes and then full-size trellises to grow peas. By unpacking this unit we will learn how to facilitate engineering experiences that address real problems or needs in school gardens. Participants will leave with resources and a framework for designing your own engineering in the garden unit and the inspiration to get started!

Fall Harvest Festival! We’re excited to partner again with the UCSC Farm to host our first in-person festival since 2019!

December 4-9, 2022: Santa Cruz, CA ~ Application Deadline: August 1, 2022
Every year, the School Garden Support Organization Leadership Institute provides an opportunity for school garden professionals from across the country to collaborate, learn from one another, and develop resources to share with a national audience. In this way, we all become able to better support school gardens in our regions, and also advance the national school garden movement.

Time for Summer Gardening! Thrilled to partner on @big green’s #ReadAsYouGrow, "connecting the stories and ideas that they are exploring in these fantastic books to what they can observe while growing food in their garden," with Readers To Eaters books in English & Spanish. See video on prgrm+ resource bit.ly/3JLxGMe ..#SummerGardening #SummerLearning #SummerReading #KidsGardening #OutdoorEducation National Summer Learning AssociationNational Environmental Education Foundation – NEEFNational Farm to School Network Common ThreadsNational Agriculture in the Classroom Life Lab
… See MoreSee Less

Here are some picture books on lives of creepy crawly bugs, some of which are told in first person (or insect).

Shabazz Larkin reads his book THE THING ABOUT BEES, about the importance of bees as pollinators.

This video shares information about the Eat Your Words campaign for Maryland families.

Gather at the Virtual Table: Community Conversations on Food and Librarianship

All are welcome to join this interactive event on how food and librarianship can (and do!) come together! This event builds upon a series of informal, online conversations among a group of librarians …

END_OF_DOCUMENT_TOKEN_TO_BE_REPLACED